Reading books, for some people, ­­­is the most effective way to have a good night’s sleep. But for me, KDramas have become my sleeping pill. Since I have no new dramas on queue, I decided to rewind some of the dramas I’ve seen before, and I’ decided to take Faith.

Plot.  I find the time-travel in this story amusing than some of the similar-themed KDramas that I’ve seen so far since it was the female lead who has to go back in time. It was entertaining but quite frustrating at the same time… I was hooked into its storyline but in my opinion, the fantasy genre was somehow exaggerated. I believe the story would still survive even without some characters having super powers.

I also liked the political twists and turns in Faith: the reorganization, the betrayal, the movement towards an independent Goryeo, etc.

This is also the first time that I’ve spent so much time thinking about the details of a KDrama’s storyline. There are a lot of ‘WTFs’, ‘how in the world did that happen’, and ‘what ifs’ that you will encounter that will definitely test your logic. I have a lot of questions in my mind during and even after watching Faith that I chose to just stop thinking about it so that I can finally have my peace of mind, lol.

Kim Hee Sun as Yoo Eun soo. I’m not really a fan of the damsel-in-distress-type of female protagonist, but I have to say that Eun-soo managed to make me like her. She’s funny and clever at the same time, and she’s exceptionally skilled in the field of medicine.

Despite the love story and romantic scenes between Eun-soo and Choi Young, their kilig moments didn’t satisfy me enough. I believe Kim Hee Sun perfectly portrayed the role of Eun Soo, but I didn’t feel the connection between her and Lee Min Ho. Walang spark (charing. Haha!)

Lee Min Ho as Choi Young. To be honest, I feel sorry for this dude. Even if he’s the General of the Woodalchis, his character is trapped inside the palace. He wasn’t able to claim the freedom that he requested even if he has finally accomplished all of the missions that the king gave him. Tsktsk. I was also amused by the fact that he wanted to exit the palace and become a fisherman instead since it shows us the simplicity of life during that period. 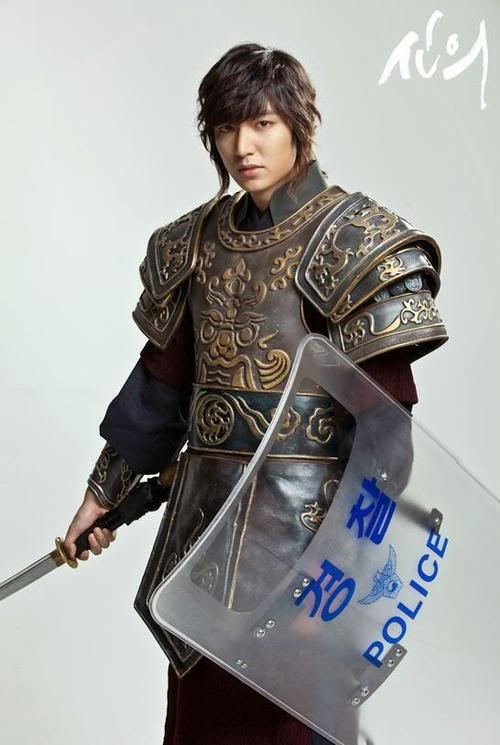 As always, I wasn’t disappointed with Lee Min Ho’s performance in this drama. I think this role is a bit challenging since the character is a mature and serious one (plus the super powers), compared to the teeny-bopper and playful Gu Jun Pyo and Lee Yoon-seung.

Ryu Deok Hwan as King Gongmin. This character really left a mark in my mind. The kings portrayed in a lot of sageuks that I’ve seen usually have a strong personality, making this king a bit different. He often gets scared and cannot make decisions on his own, which is a normal thing for a human being. He gets his strength from the people around him, and as Choi Young have mentioned, this king knows shame. He openly listens to the feedback of his people and makes the necessary actions to attend to it. The way I see it, he’s weak… but that’s also the reason why he’s strong (ene dew? Haha.)

I love how he shows his affection towards the queen… how he worries for her, and most especially his simple glances towards her (in the first episodes). I have to admit that what I always look forward in the episodes is the love story between these two.

I don’t really know Ryu Deok Hwan before I watched this drama, and I have to say that I was impressed by his acting skills. Aside from the kilig scenes, I was totally immersed with his acting when the queen was kidnapped. The moment when he almost lost his sanity and let go of all his pride to beg his uncle for his queen’s safety. Omoooooooo~~~~

Park Se Young as Queen Nogook. I love this character soooo soooo much. Despite her frail body, she is actually a strong-willed, smart, and loving wife to King Gongmin. She’s always there to support him and help him with his political affairs, even if it means going to war against her home nation.  I’m a huge fan of their love story, which started in Yuan. She even studied Goryeo language so that she can talk to and listen to him.

Like Ryu Deok Hwan, this is also the first time that I’ve seen Park Se Young. She also did a great job in portraying the smart and sophisticated Queen Nogook.

Yu Oh Seong as Gi Cheol. Probably one of the most annoying antagonists I’ve seen so far. He irritates me a lot, so I guess he’s an effective actor. HAHA. I like how he’s insanely evil, but at the same time hates the super powers.

The Woodalchis. I actually grew attached to the Woodalchis while watching the drama, and I think they provided the best support in this drama. I love their bond and their loyalty not just to their King, which is given, but also to their General. I would like to give a shout out to Jeo Sook, who somehow made me cry when he died protecting the monarch. Ajujuuu~

Lee Phillip as Jang Bin. He’s the royal doctor during this time period and she became Eun Soo’s best friend, teacher, counselor, and confidante. I like the idea that they are working hand-in-hand and are willing to work with each other. Jang Bin played a big role in helping Eun Soo to adapt in this new world that she got into, so ***SPOILER ALERT*** it really made my heart crumble when he was killed. Ajujujuu~~ ***END SPOILER***

Gi Cheol’s minions. It’s quite obvious that I didn’t appreciate the super powers of the characters right? So I cannot comment much on Gi Cheol’s minions. However, I particularly liked the Soo-in and Eum-ja duo [minus, of course, the powers]. Why? I find them cool. HAHA.

Overall Prodution. Setting— I’m a big fan of sageuk  and I had to say that this drama’s historical element caught my interest. This is something new for me since the drama is set before the Joseon dynasty, which is always the time period of every single sageuk that I’ve seen so far. Watching this drama added some heat to my boiling desire to study not just Korea’s but Asia’s history as well.

Cinematography—it was fine, but I didn’t really appreciate the animation effects of the blood splatter during the action scenes. I prefer the morbid and realistic ones, just sayin’.

A pizza-vorous karaokeholic who loves to draw, eat, travel, and football. Daughter of Christ. View all posts by thefrustratedmangaka